Pink Floyd are one of the biggest bands in the world. They’ve sold 250 million albums, sold out football stadiums and will have a song from ‘Dark Side of the Moon’ on the radio somewhere in the world right about now.

But there are two Floyds: the prog rock behemoth of course, but also the very English psychedelic pop group of the 1960s. That Floyd was led by guitarist Syd Barrett, who wrote all the songs on their first album and the early singles, like ‘Arnold Layne’ and ‘See Emily Play’ but who left us early, one of the first and most enigmatic casualties of the 1960s, the victim of too much of what you could have too much of in 1967. Ironic then that deprived of their chief songwriter, the Floyd’s subsequent songs are almost entirely about Syd, viz Shine On You Crazy Diamond, Comfortably Numb and just about all of Dark Side of the Moon. 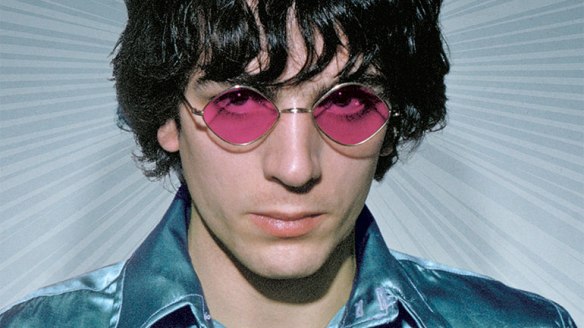 Post-Floyd, its lost genius made two solo records that have achieved cult status, ‘The Madcap Laughs’ and ‘Barrett’, both essentially the sound of a man with a very fragile and delicate state of mind actually falling apart. At the age of 24 he was gone, disappeared, unable to function.

Roger Keith Barrett was born on 6 January 1946 in Cambridge, into a very middle-class, cultured and musical family, all piano lessons and ‘Wind In The Willows’. He got the nickname ‘Syd’ when he showed up at Scouts wearing a working class flat cap instead of his Scout beret and “Syd” was the only working-class name they knew.

After his father died a month before Barrett’s 16th birthday, his mother, eager to help her son recover from his grief, encouraged him to join a band with his new guitar.Always a good looking guy, it was all the encouragement he needed be bohemian. Awful at everything at school apart from Art, where he was properly gifted, he applied tor Camberwell College of Art in London, where he arrived in the summer of 1964 to study painting. He lodged at 39 Stanhope Gardens, Highgate N6 with an old mate from Cambridge called Roger Waters, who was studying architecture at Regent Street Polytechnic. Along with a couple of guys from his course, Nick Mason and Richard Wright, Waters was playing student parties in a band known as either the Sigma 6 , the Tea Set, the Meggadeaths, Spectrum 5, The Architectural Abdabs and finally The Screaming Abdabs depending on which day of the week it as. Syd joined almost immediately. They were just an occasional party band playing the few old blues numbers they knew and improvising with lengthy solos just to fill the time. They got a new name, in late 1965, The Pink Floyd Sound  courtesy of two very obscure American blues musicians Pink Anderson and Floyd Council.

The also had a light show, which turns out was the key because no one else did. It was little more than painted spotlights nailed to a wooden frame but it got them noticed and a booking for a private Sunday afternoon gig  in early 1966 at the Marquee Club  called the Giant Mystery Happening. They went down well and did more of Sundays at what was generally known the Spontaneous Underground (well, it was 1966).

By the summer, he moved into the attic room of 2 Earlham Street in Covent Garden and wrote most of the Floyd’s first album while all the other Floyds were on their summer hols. He was helped along by copious amounts of grass and the then still-legal LSD, which he had first discovered before he left Cambridge , where it was rife among Bohemian academics who you could via contacts get the best stuff straight from Sandoz the Swiss manufacturer.

After headlining a series of fundraising happenings for the London Free School throughout the autumn at All Saints Hall, billed as ‘London’s farthest out group’, they were the Darlings of the Underground. And Syd was its heartthrob. They were the house band at The UFO Club at 31 Tottenham Court Road, London’s premier psychedelic nightspot. Only when they signed to EMI did they give up their studies to turn professional. Syd agonised over leaving art college and Roger Waters was actually working as an architect, designing new vaults at the Bank of England.

The first single ‘Arnold Layne’, a dark piece of pop about a young man who steals ladies’ undergarments off washing lines of a night, got to Number 20 but its follow up ‘See Emily Play’, specially written by Syd for the ‘Games For May’ concert that took place on May 12 1967 at the Queen Elizabeth Hall on the South Bank, got to number six in the charts. That meant going on Top of the Pops and that meant being pop stars, a difficult transition for the band who only three weeks earlier had headlined that quintessential counterculture freak out, the 14 Hour Technicolor Dream, attended by 10,000 people at Alexandra Palace, taking the stage at 3.30am just as light of a new day was breaking through the stained glass at the Palace. It certainly helped that just about everyone present was stoned or tripping or both.

From the middle of 1967, Syd began to unravel, initially only rarely, on occasions he wasn’t there but a day later was at the peak of his powers again. Ultimately though there were more bad days than good ones and the feeling that they weren’t phases that would pass. It didn’t help that he moved to a flat ar 101 Cromwell Road SW7 sharing with a number of loony messianic acid freaks where it was unwise to accept a drink unless you had actually poured it yourself. By December 1967, back from a disastrous US tour, he fell apart in front of 15,000 people at a festival at Olympia in West London standing immobile and speechless on stage throughout the show. In January 1968, David Gilmour, an old Cambridge school friend, was added and for a couple of weeks they were a 5 piece, but on the way to Southampton for a gig, someone said shall we pick up Syd? and they all agreed no.

Within a few months, he started recording his first solo album ‘The Madcap Laughs’ at Abbey Road, but he was in no shape to complete it. He took a year off and stayed in bed most of the time at 101 Cromwell Road, where a powerful drug called Mandrax – Quaaludes to my American readers – became his drug of choice. Island Records founder Chris Blackwell said he once took half a mandy and it wiped him out for three days; Syd took three at a time. He tried painting but by early 1969 he finally had enough songs to record again and completed his album.

He started recording the even more psychotic follow up ‘Barrett’ a few weeks later, produced by Dave Gilmour. Syd rarely played with the other musicians because it was too difficult to get him to turn up or perform when he did. It was mainly basic tracks that Gilmour then got musicians to tart up to highlight his old friend’s talent. He only played live once, back at Olympia in June 1970, but the show was a disaster. The PA was terrible and Barrett raced through four songs before fleeing the stage before the final song had ended, leaving the band to carry on Syd-less.

And that was it. Career over aged only 24. There were some abandoned sessions in 1974 but he made no further musical contributions of any note. He lived in London and the back in Cambridge for the rest of his life, kept going on a steady flow of royalties from his Floyd work. He lived alone, painting all day then quickly destroying whatever he had created, and had no friends to speak of, only a devoted and protective family around him.

He was kept afloat by royalties from his songs. To give the Floyd their due, they made sure that every compilation album included at least one Syd Barrett song for no other reason than the royalties would help their fallen friend. Dave Gilmour in particular made sure the money got to him. In an average year, he made £200,000; in 2001 when Pink Floyd released greatest hits set ‘Echoes’ he made £2 million. Poor Syd indeed. Not surprisingly he left £1.2 million in his will when he died of pancreatic cancer in July 2006 aged only 60.