Who was Larry Parnes you ask? Well, he was the most famous English pop manager and impresario of the early pop era, if you will the Simon Cowell of his day (but with slightly more taste).

He managed our early rock and roll acts like Tommy Steele and Marty Wilde, plus ran a larger stable of very nice young men he had discovered and championed. His heyday was the mid-50s to the mid-60s when his acts largely got swept away by The Beatles and guitar groups. Luckily by then he had made enough money by then to move on. 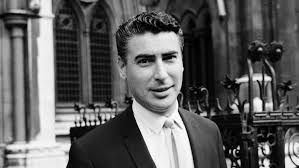 By the summer of 1959, Parnes had seven singers under contract: Steele and Wilde, plus Billy Fury but also-rans too like Vince Eager, Dickie Pride, Johnny Gentle and Duffy Power. He specialised in taking ordinary working class lads and transforming them into extraordinary stars, with sexy evocative stage names. Tommy Steele had begun life as merchant seaman Tommy Hicks, Marty Wilde  as Reg Smith and Billy Fury as Ronnie Wycherley, a tugboatman from Birkenhead.

A 1959 BBC ‘Panorama’ documentary referred to him as a Beat Svengali and christened him “Mr Parnes, Shillings and Pence”, not because he made a lot of money, but because he took 40% as his management fee. Actually he offered his acts two types of contract: a straight percentage, where he paid all the expenses; or a guaranteed weekly salary of something like £25 a week over 5 years, which to guys who otherwise would be on £12 a week in a factory sounded like they’d won the Pools.. In his defence he did have substantial overheads: they had the best of food, they were taken to the best of restaurants, they were bought cars, they had decent tailors and hairdressers.

He was born Lawrence Maurice Parnes at 98 Christchurch Road Kilburn NW6 on 3 September 23 1929, into a wealthy Jewish family in the rag trade. The family owned three ladies clothes shops and several properties along Oxford Street, which provided him with a nice private income and allowed him to indulge in his theatrical ambitions, the same way as Brian Epstein did 6 years later.

As a young gay wealthy man of means he spent time in certain clubs – often described as after hours places for a ‘select clientele’ (lest we forget homosexual activity was illegal in Britian in the 1950s) –  and one evening in 1955 was in La Caverne, a basement bar in 34 Romilly Street. With money to burn, he became part owner and was persuaded to invest in a play entitled ‘The House of Shame’, which was losing money until a publicist called John Kennedy was recruited. He changed the play’s name to the far racier ‘Women of the Streets’ and paid two actresses from the cast to stand outside the theatre dressed as prostitutes during the interval. They were arrested of course, but it got in all the papers and the play took off.

In August the next year, he bumped into Kennedy again in The Sabrina coffee bar at 15 Wardour Street. Kennedy asked him what he thought about rock and roll and he had to admit he didn’t know what it was (he was more of a Johnny Ray man). Kennedy said he had found Britain’s first rock and roll sensation and with backing and management. there was money to be made. He went to see 19 year old Bermondsey-born merchant seaman Tommy Hicks perform at The Stork Club at 9 Swallow Street and was blown away. He agreed to become Tommy’s joint-manager alongside Kennedy and took offices at 245 Oxford Street, on the corner with Argyll Street.

The first thing to change was the name. Tom Hicks sounded too much like Tom Mix so they came up with Steele. With their contacts, Steele shot quickly to fame in the UK. He signed with Decca in September 1956, released his first hit single ‘Rock With The Caveman’ in October, headlined his first tour in December had his first Number One with ‘Singing The Blues’ in January 1957 and in February cameras started rolling on biopic ‘The Tommy Steele Story’

As the money was rolling in, he went on the look-out for more acts. Songwriter Lionel Bart, who had written Tommy Steele’s earliest hits, recommended take a look at Reginald Smith from Greenwich, who was playing in the coffee houses of Soho. He signed him without even seeing him play, just turned up at his house in Greenwich with a contract. The first thing he said was ‘Reg Smith is dead, you’re now Marty Wilde’, Marty from a rather sentimental Ernest Borgnine film and Wilde because it was sexy, with an ‘E’ stuck on the end for good luck. Reg hated it and they tossed a coin to decide if he should keep it, Reg lost but before long was featured singer on TV’s ‘Oh Boy!’ to 20 million people a week, so he didn’t really care.

One night in September 1958, in Marty Wilde’s dressing room at the Essoldo Birkenhead , 18 year old tugboatman Ronnie Wycherly walked in and asked to play a few of the songs he had written. According to legend, Parnes was so impressed that he added him to that night’s bill. Ronnie Wycherly became Billy Fury – ‘a first name with a touch of sensitivity and a surname with sex appeal and mystique’. According to Ian Dury, ‘There’s only ever been two English rock ‘n’ roll singers – Johnny Rotten and Billy Fury’. And he did know a thing or two did Ian Dury.

Christ, Billy Fury was a good looking guy. Great cheekbones, a hell of a mover and a fabulous quiff that somehow slipped and fell on his forehead and bounced back. Parnes got him on Oh Boy! too and he was off on a seven year career of hit after hit, which survived even the beat groups’ arrival. 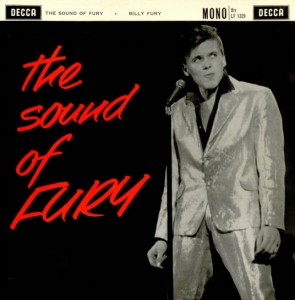 Parnes had a couple more successes, with cheeky Cockney chappie Joe Brown, the only one to resist a name change (Parnes’ suggestion was Elmer Twitch. Seriously, Elmer Twitch) and Billy Fury’s piano player, Georgie Fame, who as Clive Powell was given the ultimatum that if he didn’t use as the Fame name he wouldn’t be signed.

Alas, Vince Eager – Roy Taylor on his birth certificate – was not a success, despite Parnes pulling in favours and getting him lots of TV work. He failed to trouble the chart compilers and was never heard of again. The same fate befell Richard Knellar from Thornton Heath, who became Dickie Pride. he was a great stage performer – the Record Mirror said that the theatre shook so much during his performance that he should be known “The Sheik of Shake” – but he went off the rails and disappeared.

Next was Ray Howard, from Fulham, renamed Duffy Power, after the recently-deceased Tyrone Power. He never survived passing on Lionel Bart’s ‘Liivin’ Doll’ which went to Cliff Richard of course. And who remembers Nelson Keene, Lance Fortune or Johnny Gentle. Actually Beatles nerds remember Johnny Gentle, because  in 1960 on one of the most godforsaken tours imaginable, of small towns in the north of Scotland (‘Good evening, Alloa!), he was backed by a bunch of Herberts from Liverpool called the Silver Beetles. Yes, the same Beatles whose enthusiastic guitar-and-harmonies approach rendered all of his acts obsolete overnight only a couple of years later. No one was interested in mean and moody solo James Dean-type singers in 1963.

Luckily he had made his proper money promoting live shows, the package tours playing one-night stands at theatres wherever an audience could be packed in. Tours like the Big New Rock and Roll Trad Show or the Big Star Show of 1962 which trailed round ABCs and Granadas two shows a night. Parnes’ ‘The Fast Moving Anglo American Beat Show in 1960 had starred Gene Vincent and Eddie Cochran, but after the last night in Bristol that the car taking Vincent and Cochran to London Airport crashed near Chippenham in Wiltshire and Cochran was gone.

Parnes moved into the theatre, with his client Tommy Steele in Half A Sixpence in London and on Broadway. Joe Brown opened in Parnes’ Charlie Girl in the West End in 1965 and ran for five years. He bought his own theatre in 1972 and owned racehorses but was retired ny 1981 and lived alone in a penthouse on the Cromwell Road.

He died at Westminster Hospital on 30 July 1989 of pneumonia aged only 57. Alas Billy Fury died in 1983 but Parnes might get some satisfaction that his first client Tommy Steele is still going at the age of 78 and currently on tour around the country, 76 year old Marty Wilde’s diary is pretty full for the next six months and Georgie Fame and Joe Brown too are still going strong.