‘Who was Jet Harris?’, most of you will ask.

Well, the quick answer is that he was the bass player in The Shadows, backing British rock and roll perennial Cliff Richard in the late 1950s and early 1960s, before easing into an equally successful solo career. In 1963, his annus mirabilis, he was earning an extraordinary £2,000 a week. That’s Premiership footballer money.

He was a great musician, a terrifically good looking bloke, well dressed, mean and moody with fabulous, truly fabulous hair. If the Shads were basically Cliff was the Elvis and Hank Marvin the Buddy Holly, then Jet Harris was definitely, most definitely the James Dean.

But the better answer is that he was a one in a million guy who blew it. With drink and bad luck. But mainly drink. 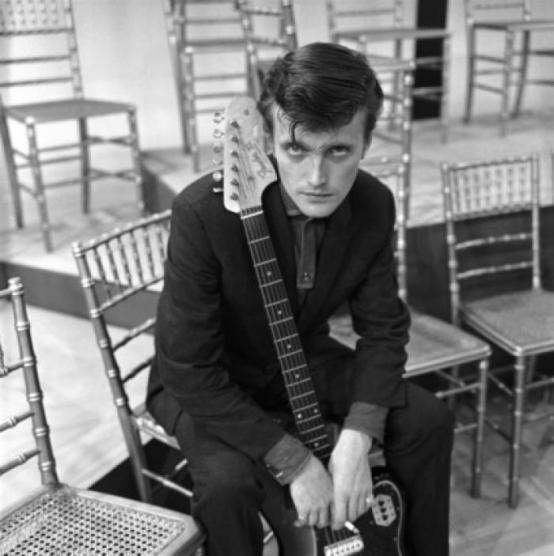 His average drinking day would include two bottles of vodka and ten pints. He would keep half a bottle of vodka by his bed, drink half as soon as he woke up, go and make some tea, then drink the other half. And he did that for more than 30 years before finally giving up the bottle in 1996 and spending the last 15 years of his life completely sober.

Fifty years on, it is easy to forget just how successful the Shadows were. They had 15 Top Ten hits, including Apache, Kon-Tiki and Wonderful Land, which were all Number Ones. On top of that they backed Cliff on 18 Top Twenty hits, five of which were number ones, including ‘Living Doll’, ‘Travellin Light’, ‘Please Don’t Tease’, ‘I Love You’ and ‘The Young Ones’. Jet played on almost all of them. When ‘Apache’ hit Number One, it knocked ‘Please Don’t Tease’ from the top spot.

He was born Terence Harris in Willesden, North London in July 1939 – he would’ve been 76 this week had he lived – and grew up at 40 Brenthurst Road NW10. At school he excelled at sprinting earning him the nickname of ‘Jet’. Leaving school at 15, he followed his dad into United Diaries in Park Royal as an apprentice sheet metal worker, making milk churns. Luckily for him, rock and roll hit when he was 17. A natural musician, he was soon at the ground zero of early British rock and roll, the 2Is coffee bar on Old Compton Street. There he met Brian Rankin and Bruce Cripps, a couple of likely lads from Newcastle, and a young Elvis-alike from the suburbs called Harry Webb. They all changed their names – to Hank Marvin, Bruce Welch and Cliff Richard respectively – and in November 1958 became Cliff Richard and the Drifters.

On only a flat wage of £25 a week from Cliff, they decided they should branch out and make their own records as The Drifters. Unfortunately the famously litigious manager of the popular US vocal group of the same name threatened to sue, so over a few beers in a Ruislip pub, Jet came up with ‘The Shadows’, naturally because they were always in Cliff’s shadow.

During an engagement at the Finsbury Park Astoria, Jet met a rather vivacious girl called Carol Costa from Chiswick and they were married at Hounslow West Church in Bath Road, Hounslow in June 1959. He was 19 and she was 17. However within a year, despite the birth of a son, they were in trouble due to his drinking and his roving eye. Even at this age he had a drink problem that was noticeable to many around him. He was always nervous before going on stage and would drink to calm himself. And he was not a nice drunk either. He was only 5′ 6″  and often compensated by picking fights, usually with much taller men. He caught some flack too for his wonderful Barnet, which was often dyed blonde and always piled high.

Unfortunately there was a bit of an attraction between Carol and Cliff. Alone most of the time with a new baby, she turned to the virginal Cliff for comfort and it blossomed into a full blown affair. When his strict parents found out, they insisted he end the relationship immediately lest the public find out he was romancing a married woman. A bit of a career-ender that in 1960. As at the time of writing in 2015, it’s the only occasion Cliff has acknowledged having sex with a woman.

Already a heavy drinker, Jet went into an alcoholic spiral. ‘I pretty much knew something was going on between him and my wife but I went on stage every night and stood there behind the man, looking at the back of his head backing him up.’ The more money he made, the more he drank. He thought that’s people with money did. If you work in a factory, you can’t drink during the day so you do it in the evening. If you don’t have that schedule, well you can just drink, can’t you?

As his behaviour became more erratic, he risked wrecking everything his working class band mates had worked so hard for. Rock and roll had helped them all escape a life of factory work and they weren’t about to throw it all away because their bass player couldn’t keep out of the pub. One night at the Cavern club in Liverpool, during the Shadows’ famous trademark walk, he fell off stage. They offered to stop work for 3 months so he could get help, but he didn’t think he had a problem so he refused. 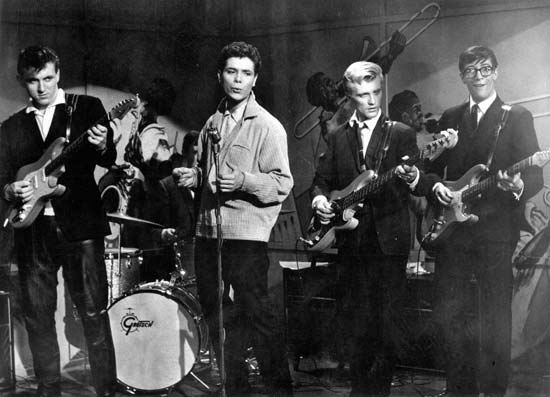 It all came to a head in April 1962 at the NME Poll Winners at the Empire Pool, Wembley. There there was a free, all-day bar backstage for performers and you will not be surprised to learn that Jet took full advantage. He was sacked right there in the backstage bar, moments before he went on stage to collect the NME’s Best Instrumentalist award. He then played three songs with the Shadows, put his bass down and walked out, never to return.

Easily the best looking guy in the band, he quickly signed with Decca and released moderately successful solo instrumental singles, in particular The Man With The Golden Arm, a mad, twangin’ version of the Elmer Bernstein theme from the 1956 Sinatra movie. Always nervous before performing, he simply drank even more to calm himself now he was (literally) out of the Shadows and out front. Management paired him with former Shads drummer Tony Meehan to spread the pressure and improve sales. Which is precisely what it did. ‘Diamonds’, featuring a young Jimmy Page on rhythm guitar, went to Number 1 in early 1963, replacing The Shadows ‘Dance On’. Other huge hits ‘Scarlett O’Hara’ and ‘Applejack’ followed, and package tour after package tour were in diary. The future can not have looked any brighter.

And then it all went wrong.

On the way back from a gig in the Midlands with his girlfriend singer Billie Davis, his chauffeur-driven car collided with a bus and he was knocked unconscious. He suffered some brain damage – certainly his moods got worse –  and needed 34 stitches in his head. As if the injuries weren’t bad news enough, the papers were full of the fact that the lady with him was not his wife. No one knew about his separation from Carol, but this was at the time of Profumo so prurience was in that year and a number of newspaper commentators voiced their disapproval of 17 year old girls consorting with married men and married men consorting with 17 year old girls. Billie bore the brunt as Jet explained that he was actually separated and awaiting a divorce, but the damage was done.

Under pressure to get back to playing very quickly, he cracked and disappeared for six days till he was spotted in Brighton by the press. They were unrelenting – he was after all one of the biggest pop stars in the country. He was advised to rest for 6 months, which in the fickle world of Pop would have effectively ended his career. Worse was to come. Three days later, he was arrested on the seafront for being drunk and disorderly. His solicitor tried the old my-client-was-taking-some-prescribed-sedatives-and-unwisely-drank-a-beer approach but to no avail.

He now went completely off the rails. He couldn’t  get work, was depressed and when he said he was popping out for a paper, he’d disappear for 3 days on a bender. He did some shows in early 1964, but he was in the papers mainly for his chaotic private life. His romance with Billie was on/off and was hospitalised at St Mary’s Paddington after one particular drunken row.  A year later in March 1965, he was arrested again, and charged with common assault after being arrested at home in Portsea Place, Marble Arch after pointing an unloaded shotgun at a group of people he had drunkenly fallen out with. In July 1965 he was arrested for drink driving after crashing his car into two parked cars. Running out of money and unable to get any work, he sold his story to the papers, not for the first time.

By 1966 he was living in Cheltenham with a new girlfriend, working in a pub for £15 a week, barely three years after earning two grand. He tried out as bass player for the newly formed Jeff Beck Group in January 1967, but after their first rehearsal, Beck, Rod Stewart and he went out for a drink and the next thing he knew it was 6 o’clock. Unfortunately it was winter and dark, so he had no idea whether it was 6am or 6pm. He was quietly dropped and replaced with Ron Wood.

From then on, his life was largely outside music and involved moving around the country getting manual work for drink and rent. In September 1968 he was found slumped over the steering wheel of a car in Marylebone, with a blood alcohol level four times over the legal limit. Unfortunately the car was a mini cab and he was the driver. In the next few years, he worked on a building site, as a barman, potato planter, trawlerman, gravedigger, hospital porter, dog trainer and sold cockles on the beach in Jersey. Occasional royalty cheques were swiftly blown on benders. Any relationships including marriages, collapsed because of alcohol.

He finally quit drinking in 1996 and basically stayed sober for the last 15 years of his life. he made a nice living on the fan club circuit – he always remained very popular with Shadows fans – Shads tribute bands and Stars of the Sixties tours. He made a point in his stage shows of saying how long it had been since he quit drinking, winning applause from audiences who knew how it had wrecked his career. He bagged an MBE in 2010 for services to Music but was already battling cancer. Always a very heavy smoker, he died in March 2011 aged 71.

2 thoughts on “Jet Harris: The One-in-a-Million Who Threw It All Away”