There’s a new film out in the cinemas now at the moment called ‘Beware of Mr Baker’, the Mr Baker in the title being Cream drummer Ginger Baker. It’s kind of the film-of-the-book because he released an autobiography two or three years ago, modestly called Hellraiser: The Autobiography of the World’s Greatest Drummer, which being a semi professional in these matters, I read with interest.

There was a reasonable amount of detail for the anorak like me – dates, names, addresses, inside leg measurements – and a few decent stories because well, he has had quite a life. It was perfectly serviceable as a memoir but nothing special. But the two things I learned most from the book were a) where he got his heroin and b) that Ginger Baker is not a nice man. Really really not a nice man.

It’s hardly surprising then that in ‘Beware Of Mr Baker’, he’s a complete twat. 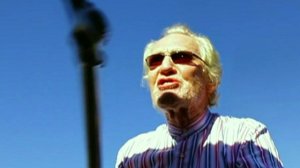 Any number of talking head rock stars are interviewed and bear out that Ginger Baker has been “fairly consistently horrible to people for the last 50 years” but even bearing that in mind, he raises curmudgeonliness, grumpiness and irascibility to whole new levels. He’s nice about no one and I dare say Mick Jagger’s formidable lawyers may be taking a close interest. The film’s director Jay Bulger had been advised to stay clear of Ginger as he’d heard he was a bit manic, even dangerous and so the film opens and ends with Baker is filmed clocking him on the nose with his walking cane and drawing blood.

However no one interviewed disputes the fact that he’s the greatest drummer in the world. At one point Eric Clapton is asked if he’s as good as Keith Moon or John Bonham to which Clapton simply scoffs and swats the question away. According to Slowhand they shouldn’t even be mentioned in the same breath.

He was certainly probably Rock’s first superstar drummer, invented the 20 minute drum solo and was the first to use two bass drums although he nicked the idea from Duke Ellington’s drummer, Louie Bellson. And his influence has extended to virtually every drummer of every rock and heavy metal band that has followed since that time has sought to emulate some aspect of Baker’s playing, especially African rhythms which he learned in the late 50s from UK jazz greats. But call Ginger a rock drummer to his face and you are likely to need two drumsticks surgically removed for your nether regions. He prefers being called a jazz drummer which is where he started when he turned pro in 1956.

Scuffling for gigs, married young with a child, he did what all sensible people would do of course – he got hooked on heroin, turned on by one of the best British modern jazz drummers of the 1950s, Dickie Devere. Heroin was everywhere in British jazz in the 1950s. “Its like grass, only better” Dickie said. It made him feel great and what’s more, he played fantastically well on it.

Hooked at 21, he took advantage of a fantastically liberal British scheme where addicts registered with a doctor and were prescribed a weekly amount to manage their addictions rather than have to drugs off teh street. Trust Ginger to pull the old trick though, of telling his GP that he as taking more than he actually so that he could sell what he didn’t need for proper cash money. Every monday for years he collected his prescription on Wimpole Street and then walked 200 yards down the road to pharmacy John Bell & Croyden (it’s still there!) at 50-54 Wigmore Street to pick up his, ahem, medication.

When he took smack, people told him he played incredibly, so he took smack before every gig. But when he’d turn up to a gig stoned they’d fire him. It took five years for him to work out that taking smack was a bad idea. Up to 1964, he was getting high and thinking he was wonderful. After that, heI was always trying to quit, which he did 29 times. It wasn’t until 1981, when he was 42 years old, had three kids and moved to a little village in the middle of nowhere in Italy (without the kids – that’s another story) that he kicked the drug for good, mainly because there was none available. He’s been clean since then. But it hasn’t helped his temper….